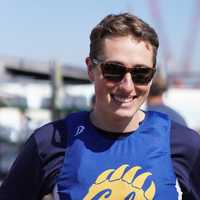 On the weekend of February 9 and 10, we hosted Cal Team Race at Encinal Yacht Club in Alameda. Eight teams competed in this race, two of which were from Cal. Conditions were almost never constant with the wind shifting direction numerous times. While we had a little bit of on-and-off rain on Saturday, Sunday was nice and dry.

Saturday consisted of 14 flights of round-robin racing while Sunday was broken up between the top four teams and bottom four teams from Saturday’s races. Our varsity fleet placed 4th overall while our JV fleet placed fifth despite this being some of our skippers’ first team race! This weekend proved as a challenge to adapt to the changing conditions of the venue, but we were able to adjust to the wind and learn a lot. Thank you to Paul Manning, Vicki Sodaro, Paul Zupan, Bob Izmirian, Jon Paulsen, Grant Hayes, Theo Rohr, Barb Grove, and Blaine Pedlow for helping to make this weekend possible!