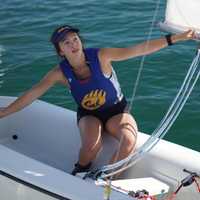 The Cal Sailing Team traveled down to Santa Barbara to compete in our first event of the Spring 2019 sailing season. Conditions were extremely light and choppy outside the seawall where we sailed both days of the regatta. On Saturday, races were postponed for almost two hours as we waited for the wind to fill in. Around noon the sea breeze finally filled in, allowing us to get through the majority of an initial round robin. Our first few races were less than spectacular as we got used to being back in boats again and transitioned to team racing after a long fall season of fleet racing. The experience was humbling and pitted against some of the best team racing schools in our conference, Cal Sailing was able to pick up the pace and learn from our mistakes. We won our last two races on Saturday against UCLA and Gauchos 3, and after racing one of the UCSB umpires approached our team and offered us some awesome feedback on our races.

On Sunday, conditions were even patchier. The current was strong and wind lacking for the first couple hours of the day; it seemed as though our hosts would have to call off racing for the day. However, winds came in and picked up to about 3-4 knots at best around 1:30 in the afternoon.

We were able to finish off our round robin from the previous day before going into two separate semifinals divisions between the top four and bottom four teams. While we won our last race of the round against the University of Washington Huskies, we were not able to upset Cal Poly in fourth, as they had won more races than our team. Once in our separate divisions, Cal beat Gauchos 3 and UCLA once again, allowing us three victories and one loss total for the day.

Overall, the event was an incredibly humbling experience and provided us a great opportunity to learn how to improve as a team for the upcoming season. Cal Sailing would like to thank UCSB for organizing the regatta, as well as Jacey, Ben, Brannon, DJ, and Nathan for hosting all of us this weekend.